The process of integration into a new culture is bound to involve with a tug-of-war process towards relation establishment.

There is a saying that 'If you go abroad, you become a patriot.' This is not true. It is only a reaction that psychological mechanism for self-protection induces when one fears against the strangeness in a foreign country and against the awareness that nobody can protect you there.

Once you step into a foreign culture, whether you like it or not, you have to go through the process for relation building between you and the world. And it includes a series of decision-makings on such elements as superior-inferior, distance and behavioral sets. Regardless of how comfortable lives you have enjoyed in your country, the new environment would enforce you to adjust to 'your new ranks' in the context already fixed in the foreign culture. Unless the process for relation setting is smoothly wrapped up, endless arguments and struggles would follow. When people of foreign born are categorized as outsiders, you would like to speak out the excellence of 'your group' in order to hold the legitimate position you aspire by proving 'your' superiority or equivalence.

Such process of relation building on personal levels starts with an investigation. What is your name? Where are you from? What did you study? What kinds of work are you doing in this country? You ask, answer (or presume) such questions on identity and discern the position of yourself and the others. Communication skills contribute a lot in the procedure. Close-to-perfect language skill in the country can provide you with fair opportunity to compete with native speakers, the ones who are articulate. Native speakers often don't afford patience to listen to the values in the 'awkward tongues' and don't have courage to give in their advantageous latitude. While the process for interpersonal relation-building is based on communication, the relation establishments between native and foreign groups are decided, according to psychologist Jung, by prejudices or collective unconsciousness that are engraved onto the group’s gene. So it is not likely people of foreign born are fairly positioned in social hierarchy that they can acknowledge for themselves, then they start to harbor wraths as victims against natives.

Artists materializing their migration experiences share certain stages according to their years abroad. First, they turn their attentions to their identities since natives in foreign countries often ask them such questions as "Where are you from?" Therefore, their art works have been based on discourses of identity, one of major issues in the field of arts in recent years. Next, artists often use such motives signifying traditions of their mother lands. While those attempts arouse temporary interests in international art markets, however, it is questionable whether they can make strong impact enough to influence collective unconsciousness of natives in foreign groups in order to improve the relation. And also it would take a long time to reduce prejudices in each group's unconsciousness with such works. Therefore, artists, then, take activist strategies as an effort to integrate with native cultures in order to, finally, arrive at their 'deserved' positions. They, at the same time, realize the difficult assignments on the road to their destination: to change the collective unconsciousness of both themselves and the group they aspire to belong to.

Art of Kyungju Park: Migration, Unequal Relation between Foreign and Native Groups and Her Strategy

Artist Kyungju Park has experienced herself the life of a 'stranger' in a foreign land when studying at Braunschweig and Berlin, Germany, and has materialized her experience of migrants and discriminations through photographs, videos, and performances. 'Applicants (1999)' are a series of photographs of migrants who visited the office of Immigration Bureau in Berlin for residency permission interviews. The Immigration Bureau office is the place where migrant workers should prove that their residencies do no harm to Germany, even beneficial. They dress themselves up in clean and nice outfits and spend many hours in front of mirrors to practice their answers for the interviews. This office is the place where most foreigners experience humiliations and angers. I understand that Park provided the visitors to the office opportunities to express themselves. Migrant workers in her photographs, knowing already that their pictures would be displayed in a museum, pose in confidence wearing bright smiles. It would probably a comfortable smile that the migrants (or victims) most wished to show to the natives (or assailants) in order to prove their superiority or equivalence at least.

Ms Park, then, comes up with 'Memories of Germany (Video Installation, 2000),' a documentary on lives of Korean miners and nurses in Germany. She completed the film while working as a secretary of the Korean Association in Berlin. However, since both 'Applicants' and 'Memories of Germany' have 'denouncing elements' in choosing subjects, that is, compiling cases of victims and reporting them to the audience, I would rather call them as 'passive strategies' compared to her later works in Korea.

Returned-to-motherland 'foreigners' again become natives in their countries and they often don't pay attention to the lives of migrant workers in their homelands. However, it was when the number of migrant workers in South Korea has already increased to around 300,000 by the time she returned, and Park realized that she can be one of assailants in her homeland, South Korea. Instead of forgetting her past in a foreign country, she deepened her layers of understanding on the relation between migrant workers and natives. She then yields 'Where are you from?(2001),' a video which shows migrant workers in Korea asking the question of 'Where are you from?' back to Korean audience. While the previous video work of 'Memories of Germany' has a documentary element, 'Where are you from?' is distinguished with its mischievous use of video editing. It displays fast changes of images since the pictures are cut and linked by each syllables. However, the video product falls into the dilemma between aesthetic decisions and messages: I was afraid whether the edited sound is lack of clarity to the audience since the linked syllables do not make a full clear sentence at once.

The music CD of 'Migrant Workers' Music Project - What is Life?(2002)' marks her shift of tones from denouncing to neutral. She starts to embody cultural capacity or political potentials of migrant workers with the project. As Park has said, she completed the music project in order to disclose the lives and cultures of migrant workers in Korea and to prove their potential contribution to Korean cultures. For the project, she scouted Eureka, an independent rock band composed of migrant workers from Myanmar; completed a music CD with songs by migrant workers; and supported an official debut concert for the band. Here the artist has chosen more active way of communication with her audience than visual arts: pop music. She also extended her roles as an artist through planning, managing and publicizing the project. Categorizing migrant workers as one of social minority groups in Korea and establishing herself as a supporter for them, she overcame the assailant-victim enmity. Now artist Kyungju Park wishes to call herself a 'cultural activist.'

The 'Migrant Workers' Election Campaign Performance (2004),' as displayed in recent 'Visual-Narrative' exhibition at Savina Museum, Seoul, has video-recorded the opinions of citizens during the three-month election campaign acts nationwide where migrant candidates asking citizens on streets for votes. What has motivated the artist to have such a strong will to overcome her own prejudice against migrant workers and to recognize legitimate status of migrant workers in Korea? An answer can be found in her performances in which she stages election campaign even though migrant workers are not eligible for election at the moment. By introducing new idea against migrant workers in a way in which is ambiguous enough to judge the idea may or may not probable at this time, she cleverly allows a positive accommodation for a future where we respect migrant workers' political rights.

Among those working on the theme of migration, artist Kyungju Park is outstanding in her efforts to share a mature progress overcoming discourses of identity and the victim-aggressor conflicts. I believe that discords between different cultures lies in the fact that we have innate fear for and prejudices against each other even before the first encounter. By showing an aspect of a possible future of coexistence, Park wishes to convert the first stressful collide into a peaceful one: in other words, planting a 'positive bias.'

Yeosu_Beginning, Middle and the End 2015 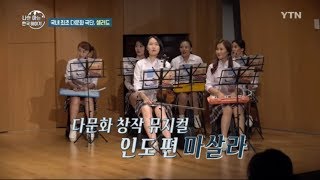